Faces from the Border: We Could Be Them – The New Yorker 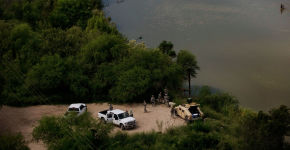 The father once illegally crossed the border from Mexico; now the son is a border-patrol agent for the United States.

On a spring afternoon, I drive along Paisano Drive, in El Paso, and spot shiny white-and-green Border Patrol vans crawling alongside an eighteen-foot fence. The agents seem bored, guarding the world’s most powerful country from possible terrorists, but mostly from Mexican men and women. The vans are parked next to the rusted fence that divides two neighbors sharing one bloodline, long historic tensions, and current trade of about a million dollars per minute, or $1.4 billion per day.

Source: Faces from the Border: We Could Be Them – The New Yorker

I’m posting this as an echo of the work we did with Crosser and La Migra. We were already working with the idea that families were divided by a border that had crossed them with the annexation of formerly Mexican territory. We were also, already cognizant of the dynamic of children of undocumented migrants finding “good” jobs with the government. I welcome The New Yorker’s reportage. It’s about time.