A short video demonstrating Sow/Reap in the “passageway” configuration:

summary project description:
Sow/Reap is a big, multi-player, game-like, interactive art installation with the theme of sowing and cutting down poppies. Sow/Reap offers a space for the participatory creation of beautiful floral landscapes. Sow/Reap comments on the War on Drugs through game play. Sow/Reap can be installed in a number of flexible and site-specific configurations.

Sow/Reap inhabits several conceptual spaces at once, and it invites players to think about play differently than commercial off-the-shelf games.

Sow/Reap contributes to the historical dialogue of visual art by offering a space for the participatory creation of landscapes. This is an ironic outcome. In trying to make a game that would work in a museum context, we ended up “painting” pastoral landscapes.

Sow/Reap metaphorically comments on the War on Drugs through game play, through the mechanic that gives players the option to either plant or to eradicate poppies. Conceptually, poppies are beautiful flowers that grow like weeds in a variety of biomes across Afghanistan, Colombia, and the United States. When the player chooses to plant a flower they will add beauty and color to the game landscape. When a player chooses to cut a poppy they reduce the beauty of the landscape.

Sow/Reap is a multi-player experience. Sow/Reap responds to a single player, but is activated by the presence of multiple players. Children, especially, delight in the space, and their presence helps Sow/Reap to shine.

Sow/Reap inhabits a conceptual space that is game-like. It is a play-ground or a play-scape. As such it presents affordances that shape the potential for play within it. Sow/Reap does not have an explicit goal. It affords the opportunity for players to sow and to eradicate poppies in a field. Competition may arise as participants pursue diverging goals.

Sow/Reap is a “big” game. It has been envisioned and designed to be projected at such a scale as to envelope a human body, to envelope many human bodies at once.

We made Sow/Reap with an Art Museum as its intended venue. Museums, galleries, and festivals pose interesting challenges for game installations. With Sow/Reap we attempt to explore “natural,” gestural interface with games, as we explore the technical and conceptual challenges that a museum going public could pose. We take Ian Bogost’s recalibration of “casual” games to heart in recognizing that this audience may not enter into a committed relationship with this game. Still, we hope to enter that audiences consciousness within a short amount of time. We understand that a typical museum goer may give as little as thirty seconds to a work in a museum context. We have therefore attempted to work within this tight time constraint for the learnability.

Sow/Reap is, also, “big” in that it requires a large space for the minimum installation of three networked play spaces (playscapes). These can be non-contiguous, contiguous, or overlapping. Sow/Reap is scalable up from this minimum installation. It makes use of Kinect sensors to enable up to six players per play space. The players interact with Sow/Reap via a “T” gesture, one that increases the width of the bounding box surrounding their data shadow. The players’ presence in the game world is signaled back to them through the projected display of this data shadow captured by the Kinect. Sow/Reap is a stable, playable, experience. We expect that the enabling technologies may change, and that features that affect gameplay and narrative may be added. Further, different installation contexts may (and will) influence the “shape” of the game itself. Each installation will be different.

We created this game with commercial off the shelf hardware. We have built a scalable framework with this hardware. We can install this version of Sow/Reap in a variety of spaces. Depending on the configuration we can handle to eighteen simultaneous participants (in the smallest configuration). People can enter and leave the experience at will. Gameplay can be learned in roughly 30 seconds, and we’ve had groups play for an hour in testing.

Sow/Reap was created by SWEAT 3.0, the third version of a collaborative dedicated to making socially conscious videogames. We have tried to make something worthwhile at the intersection of Art and Games. We’ve tried to craft an experience that can be appreciated in a short amount of time, and that will resonate in participants minds for a large amount of time.

We’ve tried to think about the meaning of gestures and of their unintended consequences. We’ve tried bring a little bit of beauty into the world, while maintaining a critical edge. We hope our effort meets with your approval.

A short video about Sow/Reap and SWEAT:

learning to play Sow/Reap in a cube configuration:

team description:
SWEAT is a loose collaborative dedicated to the creation of socially conscious videogames. This third iteration is comprised of André Blyth, Esteban Fajardo, Teri Galvez, Tommy Hoffmann, and Ben Lehr. It is directed by Rafael Fajardo.
SWEAT gathered to work on Sow/Reap during the summer months of 2013, borrowing space from the University of Denver (DU). Teri worked on the visual art; André, Esteban, Tommy, and Ben worked on game design and code; and, Rafael behaved as creative director and producer.

team bios:
SWEAT is a loose collaborative dedicated to the creation of socially conscious videogames. It is founded and directed by Rafael Fajardo. SWEAT 3.0 was convened to create Sow/Reap and consists of André Blyth, Esteban Fajardo, Teri Galvez, Tommy Hoffmann, Ben Lehr and Rafael Fajardo.

André Blyth is an artist exploring narrative vignettes through the creation of videogames. He has been creating wistful experiences at an intimate scale. His most recent works were featured on KillScreen.com (http://killscreendaily.com/articles/andre-blyth/). @andre_blyth

Esteban Fajardo is a game designer intent on creating fun and joy in the world. His work on Chambara as a part of Team OK won a BAFTA in 2015. @estebanthinks

Teri Galvez is an artist, illustrator, and character designer. Teri is the one who can’t stop drawing, gets obsessed over one good song at a time, isn’t afraid to laugh for the whole world to hear, sing as if she can, and not afraid to be herself. @ItsTeriYakiTime

Tommy Hoffmann is a gifted programmer who was also part of BAFTA winning team that created Chambara. Tommy is still water that runs deep. @tommyhoffmann2

Ben Lehr is an environmental activist who has been collaborating on the creation of videogames with Esteban Fajardo and Tommy Hoffmann since they were all in high school. Their team, Los Pinguinos Perdidos won the gold medal for videogame design in the Scholastics Art & Writing national competition.

Rafael Fajardo has been exploring the expressive potential of the videogames through his creative work. He is the founder of SWEAT, a loose collaborative that pioneered the creation of socially conscious videogames, which have been exhibited in museums and festivals world wide. Fajardo has been engaging in collaborative interdisciplinary research concentrating on learning through game-making. His projects have been funded by the National Science Foundation, the National Endowment for the Humanities, and by the Colorado Council on the Arts, altogether in excess of one million dollars. I.D. Magazine named Fajardo one of the top fifty designers in the country in 2004. He currently serves on the Board of Advisors of the International Digital Media and Arts Association, and on the Board of Advisors of Games for Change. Rafael received an MFA in Graphic Design from the Rhode Island School of Design, a BFA and a BA from the University of Texas at Austin. 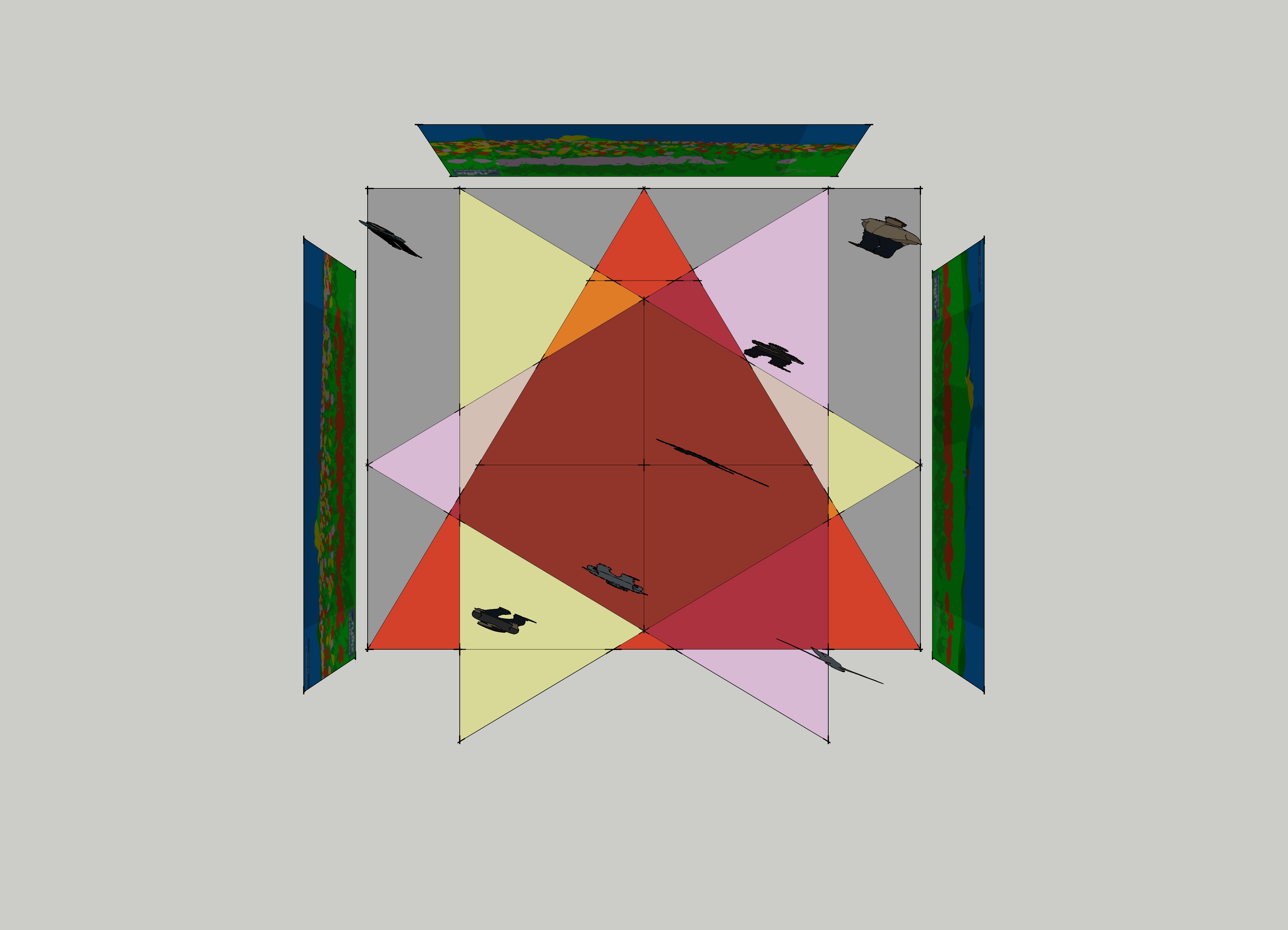 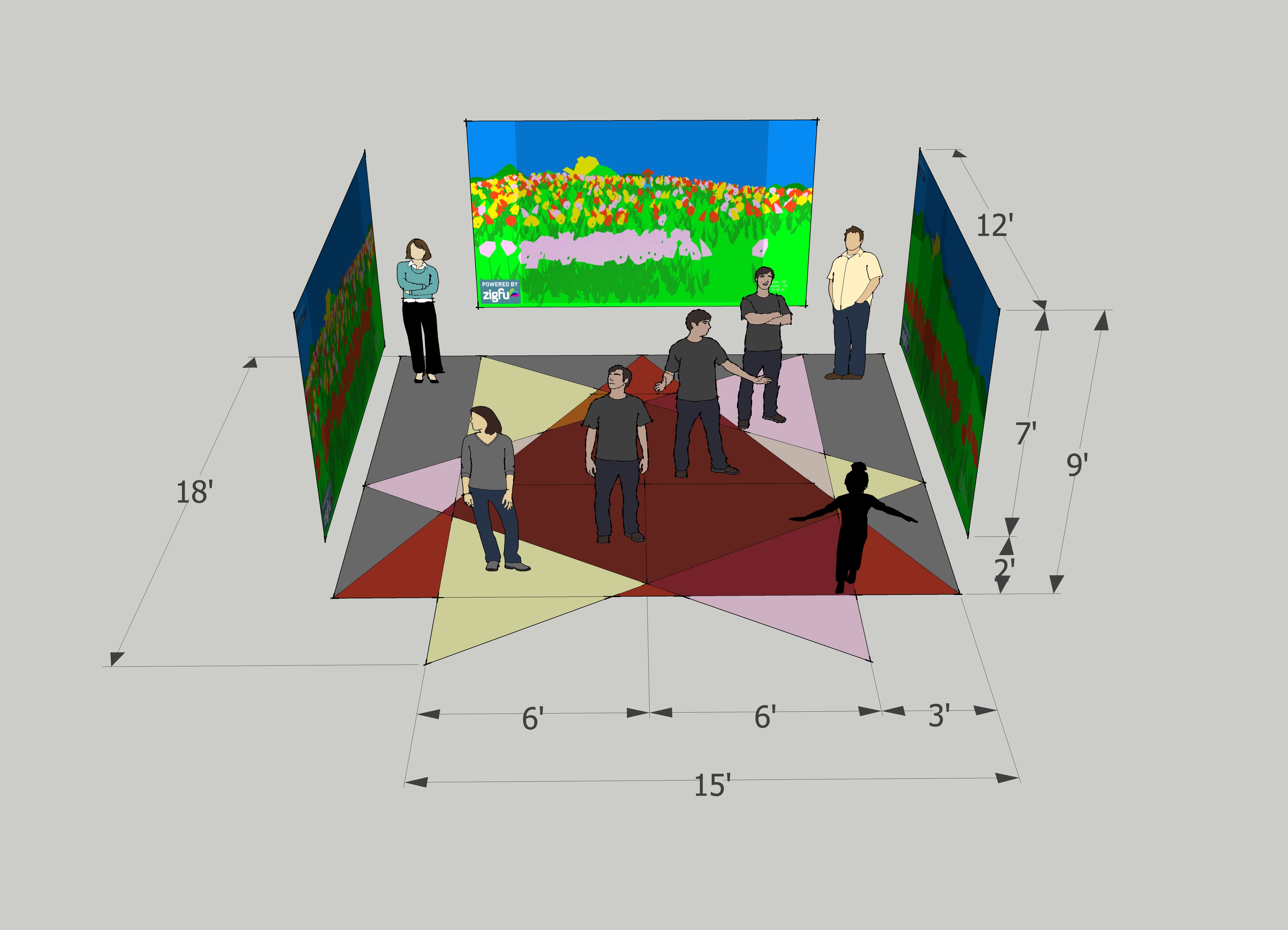 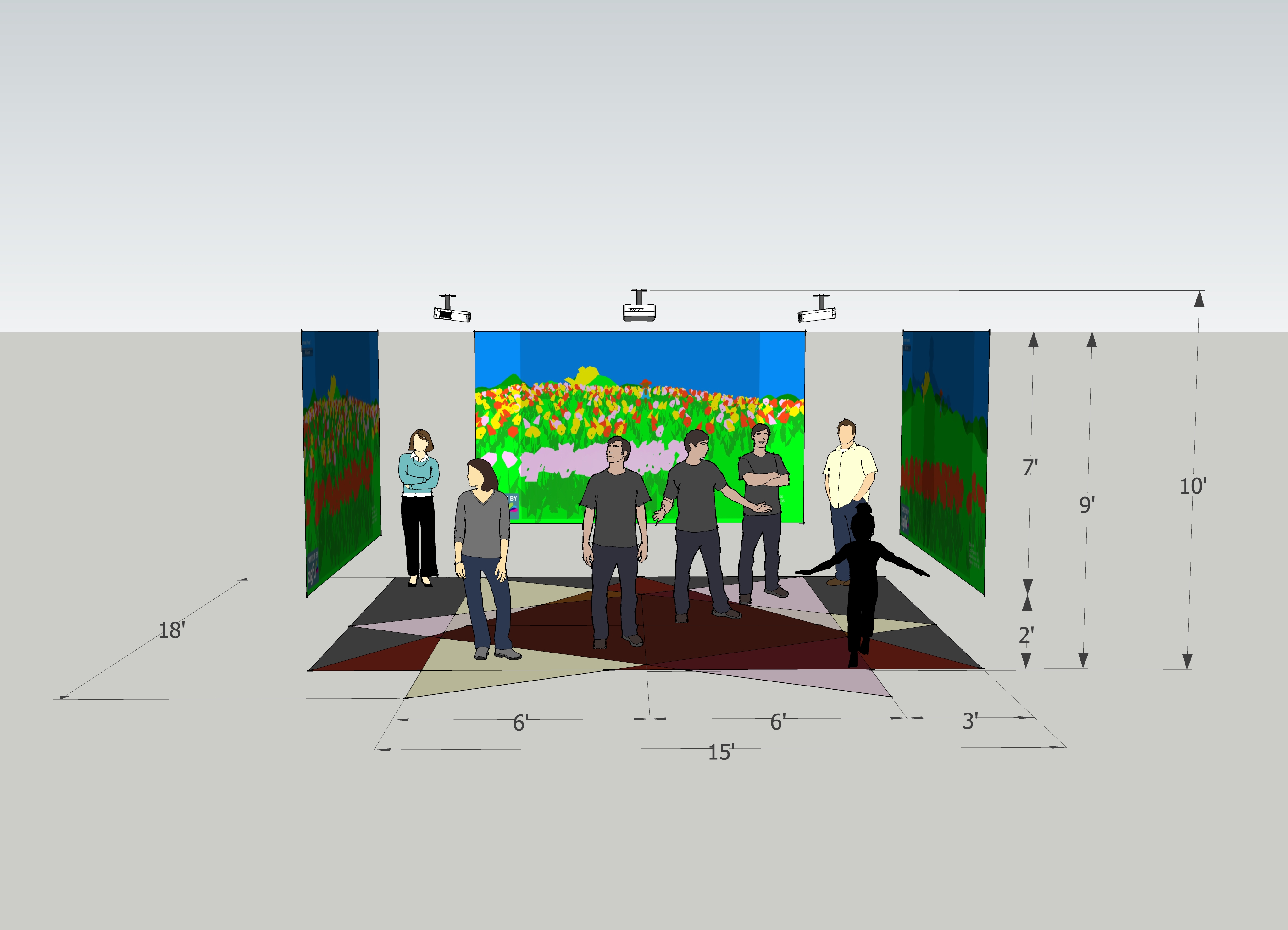 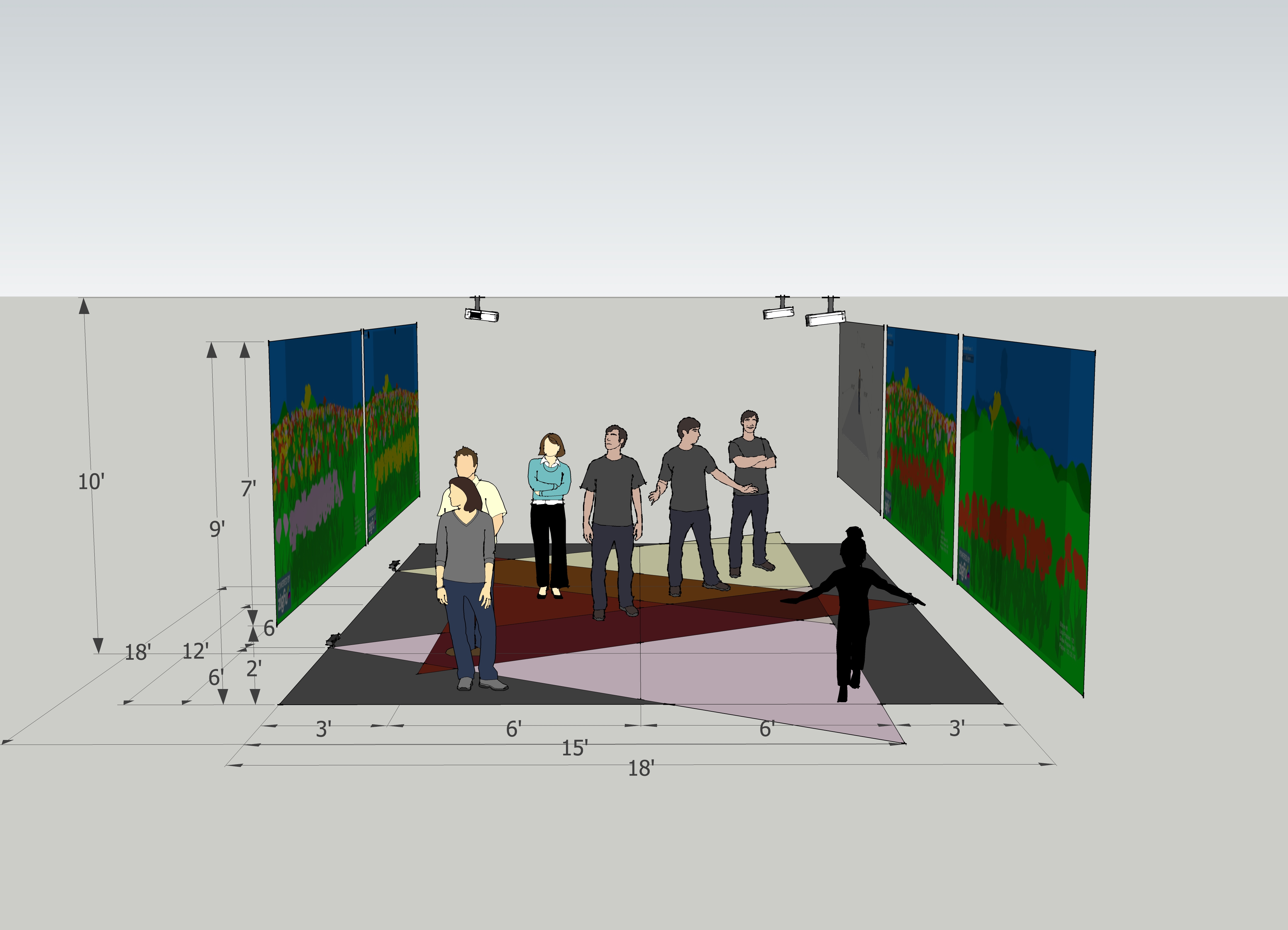 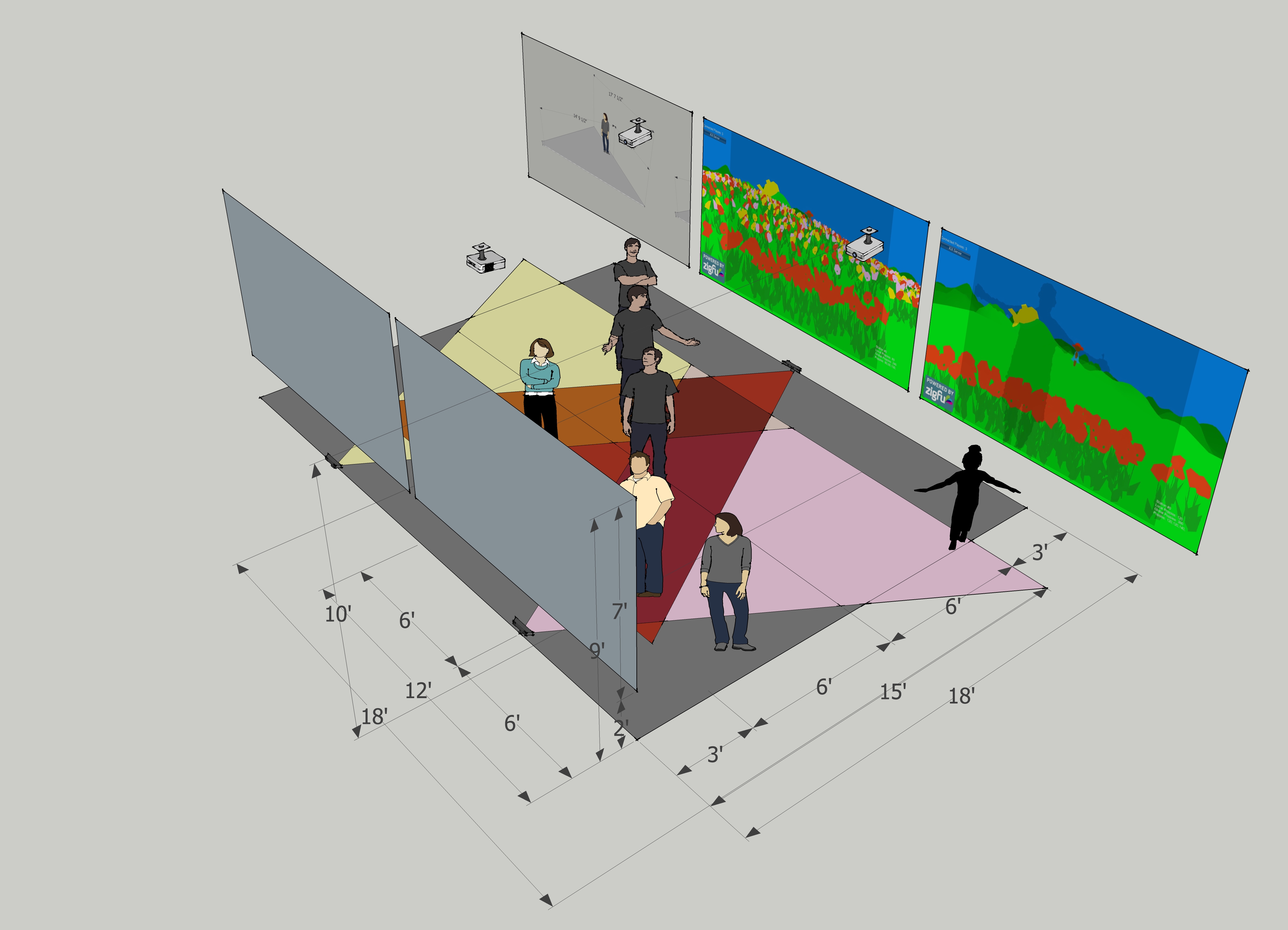 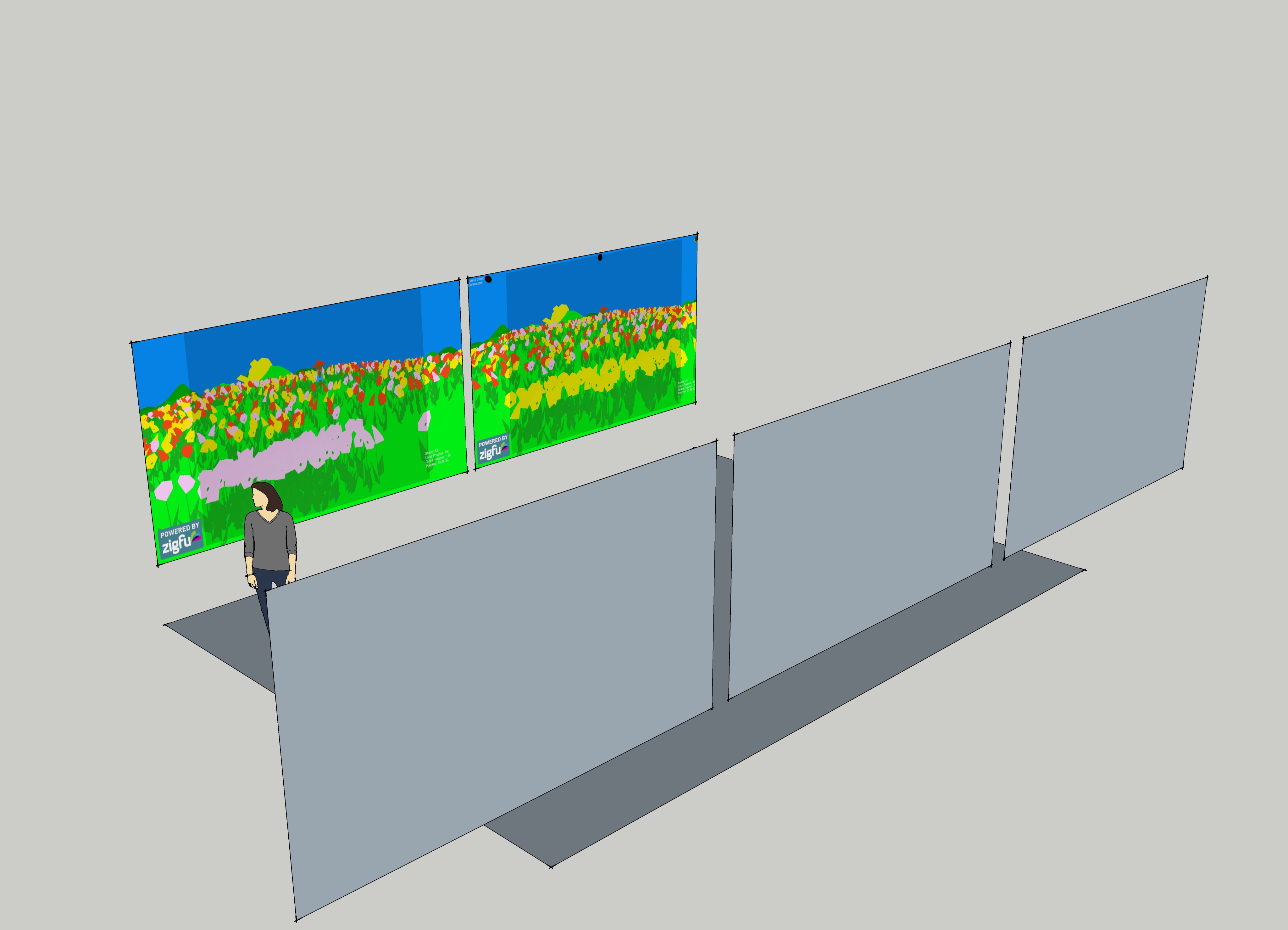 Equipment list:
The following is a list of the minimum required equipment for the smallest acceptable installation of Sow/Reap

space:
20′ (7m) L x 20′ (7m) W x 10′ (3m) H are the minimum space needs. Within this spatial envelope we have tested two configuration options. One configuration is that of a passageway, and another is that of an open-sided cube. The passageway is ideal for spaces that have circulation on two opposite ends. Participants can pass through the space and linger to participate or observe. The open-sided cube is ideal for a space with a single entrance-exit. If larger spaces are available we can outfit the frames for rear-projection and so the work can be appreciated both from within and without.

behind the scenes specifications:
Sow/Reap is built in Unity and the current proof-of-concept build makes use of ZigFu, OpenNI, nite2, to communicate with Kinect for PC sensors.

Sow/Reap respectfully submitted by Rafael Fajardo on behalf of SWEAT