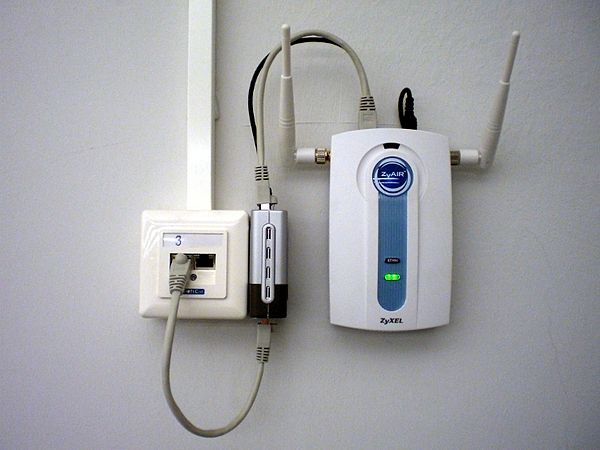 Power over Ethernet or PoE describes any of several standardized or ad-hoc systems which pass electrical power along with data on Ethernet cabling. This allows a single cable to provide both data connection and electrical power to devices such as wireless access points or IP cameras. Unlike standards such as Universal Serial Bus which also power devices over the data cables, PoE allows long cable lengths. Power may be carried on the same conductors as the data, or it may be carried on dedicated conductors in the same cable.

Given a single Power over Ethernet connection (single gray cable looping below), a PoE splitter provides both data (gray cable looping above) and power (black cable also looping above) connections for a wireless access point. The splitter is the silver and black box in the middle, between the wiring box on the left and the access point (with its two antennas) on the right. The PoE connection eliminates the need for a nearby power outlet.

via Power over Ethernet – Wikipedia, the free encyclopedia.